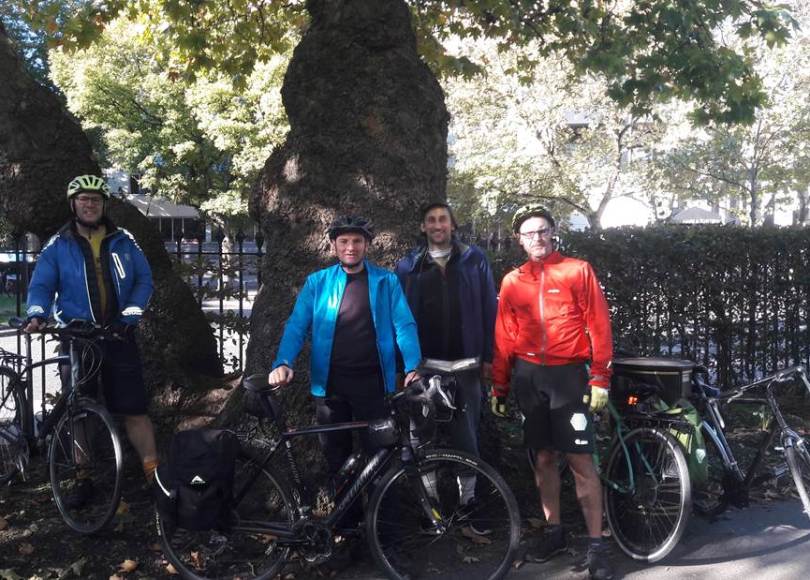 In September, Fund4Trees led a bike ride to celebrate the 200th anniversary of the publication of John Evelyn’s diaries, riding from Evelyn’s birthplace in Surrey, to Deptford in London. We’re pleased to share a combined account from three riders: our Patron Rob Penn, Geoff Clack from Islington Tree Services, and Paul Davis of Deptford Folk.

by Rob Penn, Patron of Fund4Trees

For the F4T riders (Mick Boddy, Gabriel Hemery, Rob Penn and Russell Ball) the ride began at Wootton House (near Dorking Surrey). It seemed an appropriate place in honour of John Evelyn. He was born here, on All Hallow’s Eve in 1620, into a family whose wealth was founded on gunpowder production. Evelyn was a great man by any measure – eminent diarist, gardener, prolific scribe, urban planner and a political survivor in an age of extraordinary events. Tree-folk, of course, herald him as the author of Sylva, one of the earliest and most important treatises on forestry (and early arboriculture) in the English language. Evelyn didn’t return to Wootton until his 70s, spending most of his life at Sayes Court Manor in Deptford, SE London, the F4Ts ride destination.

The baroque mansion at Wootton is now a grand hotel and wedding venue, and with the early-morning mist covering its beautiful gardens, we set off into the autumn sunshine and bedlam of the A25. There was a brief detour, down sandy lanes through the Surrey Hills to Abinger Common – for a photo call with Peter Evelyn, one of the great man’s descendants – before heading off on our 37-mile bike ride.

Picking up Paul Davis (Deptford Folk) at Dorking train station and with fresh legs in the peloton, we crashed through Leatherhead, Epsom and Kingston-upon-Thames, before reaching Richmond Park, the lungs of SW London and home to 1,300 veteran trees. After the car-choked roads of Surrey, we rode lazily through the aged oaks and headed towards the Thames Path and Battersea Park to meet the Islington Tree Service team.

It was during a Friday ITS post-work pint that the idea of a bike ride was mentioned. All seven of us use bikes to get around the borough to carry out our duties and we try wherever possible to cycle when meeting with or surveying for external clients acting under our trading-arm ICO Green. A F4T ride was suggested and a quick online search revealed that their ‘F4T Evelyn 200’ ride would happen soon.

Jon Ryan (Arb. Manager) already supports F4T through their ‘Donate an Hour’ initiative and suggested a great way to promote the cause would be for all of us to sign-up to the scheme, (which pledges a regular donation paid monthly through PAYE) and combine a day of cycling visiting some notable London trees. We would join up with the ‘F4T Evelyn 200′ team when they reached London for the final leg of the journey and help out with the tree planting.

We realised that a route from our Islington office heading south for the Battersea Park meet-up would take us past a number of notable trees, including some that appear in the Time Out book ‘The Great Trees of London’, as well as a few sites associated with John Evelyn.

Our first stop was The Hardy Ash in the historic St Pancras Churchyard. An unusual 250-year-old specimen so named because its buttress roots have gradually sprawled over and subsumed a circular three-deep stack of tombstones placed neatly around its trunk. These were placed there in the 1860s by the author Thomas Hardy. As the architect for a new railway being built through the churchyard he was tasked with exhuming graves and moving the affected tombstones.

A little further south, we admired the two characterful Oriental planes in Brunswick Square, which although probably old, have squat, barrel-shaped, multi-stemmed, swollen, burry old boles topped with small but elegantly spreading canopies. These give a curious ‘Bonsai’ appearance. It is unclear whether this is a clonal form or a product of distortion caused by the burrs.

We then passed by the magnificent avenue of perfectly-formed tall, stately Dawn redwoods in Carey Street that stand like sentinels flanking the rear of the Royal Courts of Justice building. The UK bankruptcy court is located here, “On Carey Street” being a euphemism for being bankrupt or in debt, yet these redwoods certainly seem to be prospering despite the association.

Our next stop was to visit the beautiful acutely leaning, propped Black mulberries that frame the circular pool in the historic Fountain Court at Middle Temple, one of the Inns of Court where John Evelyn briefly studied aged 20 in 1640. The two mulberry trees were planted to commemorate Queen Victoria’s 1887 Jubilee, their straining exposed roots now tethering them to the ground like mooring ropes.

We then rode along by the river Thames admiring the hundreds of iconicEmbankment planes lining the route, diverting slightly to pass Dover Street where John Evelyn died in 1706 and to take in the Royal Society building on TheMall. Evelyn was a founder member of the Royal Society, attended the inaugural lecture by Sir Christopher Wren, and his Sylvawas the first book to be published by the Society.

Our last notable tree stop, where we met up with the rest of the ‘F4T Evelyn200’ team, was at Battersea Park where we hunted down the ‘champion’ hybrid Strawberry tree, dating from the 1850s, neatly hidden away amongst the sinuous labyrinth of paths around the parks ponds.

We met the ITS riders at the Pier Point Café in Battersea Park for lunch and a team photo by Britain’s largest strawberry tree and then headed out over Chelsea Bridge to join Cycle Superhighway 8 (CS8) in Pimlico. We passed Churchill Gardens; 1,600 council homes in 32 blocks of reinforced concrete constructed between 1948 and 1962, ironically in an era when riverside living was not desirable. The estate was part of the Abercrombie Plan to redevelop the city on more “efficient” lines with little consideration to aesthetics. The CS8 followed the noisy and polluted Millbank past TateBritain’s Grade II listed classical portico and dome and onwards to ParliamentSquare. After crossing the Thames – via Westminster Bridge – we weaved through busy traffic to the IMAX roundabout(Waterloo Bridge Road) and on to the Old Vic theatre to meet Scott Barkwidth (Deptford Folk: Secretary) and tree planting organiser extraordinaire.

At this point we joined Quietway 1 (Q1), the first TFL route to provide continuous and convenient cycle routes on quiet London backstreets. Unlike CS8, with little noise or vehicular pollution, Q1 lends itself to reduced speeds and quiet conversation. We headed past the period features of Trinity Church Square and Tabbard Gardens, over Tower Bridge Road into the light industry estate ofBermondsey. This has the highest tree coverage in central London due to the legacy of Ada Salter:local councillor and mayor in the 1920s and 1930s. Salter created a committee with the intention “not only for beautification of streets but for beautification of every individual’s body, mind and soul”. Under her guidance the local council set about planting trees, decorating buildings with window boxes and filling open spaces with flowers. She is credited with planting between 7,000-9,000 trees.

Onwards through South Bermondsey, we biked passed Millwall FootballClub’s ground (The Den) and still on the Q1, into Deptford viaFolkestone Gardens with its recently planted silver birch & Scots pines: part of the Evelyn 200 project. At the journey’s end we arrived at Sayes Court Park: former site of John Evelyn’s manor house and garden. Here there is mulberry tree, believed to date back to the 16th Century and a worthy second-place winner in the 2017 Woodland Trust “Tree of the Year”. Its origin is subject to local legend some believe Tsar Peter-the-Great planted it as an apology for his drunken escapades in Evelyn’s garden, while an alternative rumour is that it isa consequence of a failed-attempt to establish a silk industry by King James I who sent out the wrong type of mulberry tree.

We were joined by local school children from Invictus Primary School andTrees for Cities to plant four Pride of India trees. We split into four groups for the most over-qualified tree planting in Deptford’s history. Finally, to toast the successful ride we headed for a swift beer at the Dog & Bell.

Fund4Trees would like to give special thanks to Islington Tree Service for signing-up to Donate1Hour (below) and to Scott Barkwidth and Trees for Cities for organising the tree planting.

If you are interested in Donate1Hour then please visit: fund4trees.org.uk/donate/donate-one-hour/

Read more about the Evelyn200 ride by Fund4Trees