A report of the Rural Ride for Research, Chilterns, Oxfordshire – 27th September 2017.
By Colin Chambers

Knowing my enthusiasm for cycling, Fund4Trees trustee Russell Ball contacted me to see if I would like to take part in the 2017 Rural Ride for Research. To my shame I hadn’t heard of the charity before, but I was keen to learn more and readily agreed to take part. 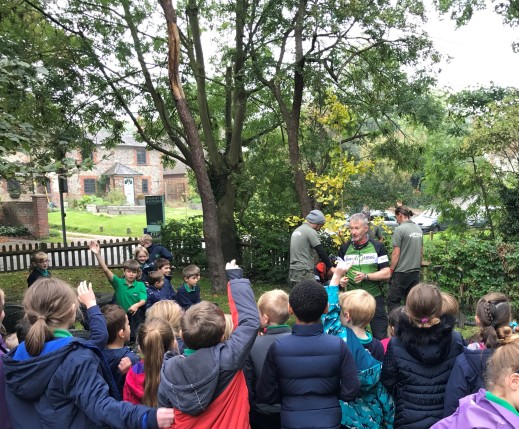 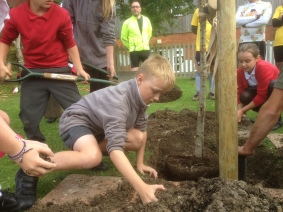 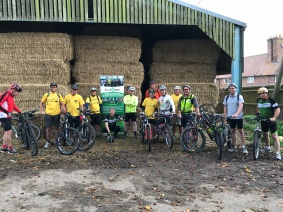 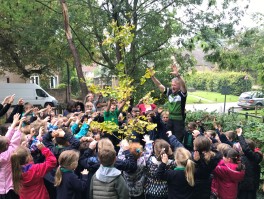 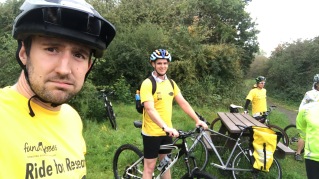 This was no ordinary cycle ride – we were scheduled to cycle via Lewknor and Watlington Primary Schools for tree planting sessions with children, organised by Fund4Trees. This was enough to ensure an interesting day in the beautiful Chilterns countryside, but there were plenty more surprises in store.

We set off at 9 AM amidst hanging smoke because the hay barn adjacent to our rendezvous had gone up in flames the day before. Just one mile up the road the chain of one of the riders snapped but our trusty bike mechanic, Paul McKnight soon got us going again.

We arrived at Lewknor School to be welcomed by a throng of 80 enthusiastic children and teachers. Contractors for the day, Heritage Tree Services, had already dug the hole, a Maidenhair Tree was in place, and everything was in ready for tree planting. The stage was set for Russell standing on an impromptu soapbox, to talk with the children and more importantly, for the children to talk to Russell.

We rattled through the biology of trees: ‘does anyone know by what process trees make their food’?  ‘Photosynthesis’, a good number of children called back, and so the lively interactive session continued, with the children demonstrating a knowledge of trees and the environment which surprised us all. A very good reminder never to underestimate green awareness among children. The session ended with arms raised and a loud chorus of “Grow Tree Grow” and soon we were off again on our bikes.

After another lung-busting climb found in this part of the world we continued along tracks through woods, and along narrow country lanes, before arriving at a woodland clearing to discover our lunch-stop.

The Barn at Turville Heath is otherwise known as the ‘No-Car Café in the heart of the Chilterns’ and while most retail outlets place car parking near the top of their business plan, Robin Harman, who runs The Barn, has done the opposite. The Barn caters for horse riders, cyclists, walkers or anyone who can arrive without the aid of a motor car.

While we sat outside, drank coffee and rubbed our tired limbs, Robin came round and collected our orders. Everything was homemade and, as we later found out, the creator of our splendid lunch knew all about where the ingredients had come from as well as a good deal about trees. Robin’s family have been actively involved in land management in this part of Oxfordshire for six generations; a Harman even worked for Henry VIII, engaged in stealing land for the crown although Robin felt less inclined to be associated with this particular ancestor.

After lunch we looked at a stag-headed oak tree on the site, and after revealing that he had studied the non-timber value of trees at university, Robin went on to tell us about a number of film directors who have paid good money to include this tree on their sets; Midsummer Murders being among the most well-known.

We cycled on, accompanied by Robin, entering a magnificent lime avenue and quickly noted that age, storms and fashion had changed the original concept from an even-aged monoculture to a mixture of old and young, different species of lime, while even a hornbeam or two had crept in. Robin reminded us all of the many difficulties associated with long-term management of an avenue like this and that was before he told us that each side of the avenue had a separate owner!

In terms of the Common land surrounding this Lime avenue,  Robin has a herd of Dexter cattle and flocks of Jacob and Hebridian sheep, not only undertaking conservation grazing on his own land but grazing parts of the Common for other land owners. We continued our ride full of admiration for Robin who truly lives by his ‘field to fork ‘ philosophy.

After more narrow lanes and steep-wooded downhill sections we arrived at Watlington Primary School to be rather humbled by 100 applauding schoolchildren. The success of the Red Kite re-introduction programme, almost 30-years-ago, was clear to see. Above the school there were 25 or more birds hanging in the sky; like aircraft stacking around Heathrow. We learnt that the children must now eat their packed lunches under a covered area because the Kites have become adept at stealing unguarded food from lunch tables.

This time it was a Sweet Gum to be planted, already showing its autumn colours. Russell again worked with the large number of schoolchildren, who revealed again just how much they knew about trees, before finishing with another loud rendition of ‘Grow Tree Grow’.

On behalf of all the riders – many thanks to our organisers Martin Gammie and Russell Ball. All the riders had a great day, finished perfectly with a couple of reflective pints.

For a final word I quote Martin:

Our thanks to Colin Chambers for the excellent write-up.

Thanks also to Heritage Tree Services for their support of the event.

Finally, our thanks to all the riders for their help fundraising to support the charity. We raised enough funds to offer another bursary in the future.